There are a host of ideas on what you can do with half wine barrel planters and on an  occasion or two, we’ll try to give you some thoughts and advantages of our furniture-like planter barrels.  Whether inside or outside, they’re are numerous suggestions that are offered, but likely the most common is the outside planter.

A story I spotted last year offers the basic layout of how and what you can do with the barrel.  The blog below is by Floridian author/writer Tymber Dalton and with several pictures, gives her take on how to get your planter ready.  We thank Tymber for allowing us this privilege.

This project only took me, oh, a friggin’ year and a HALF to get done. I bought the Jack Daniel’s half-barrel at Dom Home Depot and there it sat on my carport because I was too busy to get it done.

You start with a half of a wooden barrel and drill holes in the bottom for drainage. That is, if you’re actually putting soil IN the barrel and not just putting stuff in it to prop up a plant in a pot. 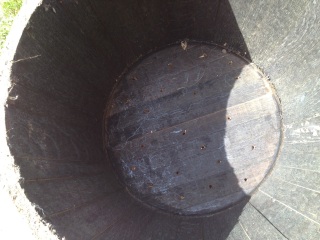 Then you set it up on a wheeled plant stand thingy so you can move it. Because a) it will be super-heavy when it’s full, and b) you want it to be able to drain.

Then you put weed fabric (or newspaper or something) in the bottom to allow water to drain but not let the soil run out all over the place. Note that newspaper will biodegrade faster than weed fabric. So while cheaper, not necessarily the best choice. (Plus I had a roll of weed cloth I could whack a piece off of.) I suppose you could use an old towel or something. 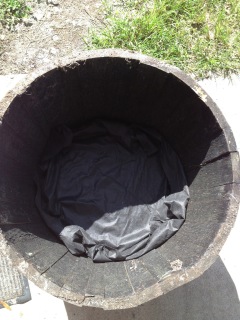 You add some rocks or gravel of your choice to help promote drainage. I just got the cheapest bag of rocks they had. (The rocks and soil actually came from Lowe’s because I was there looking for a water filter for my sink when I thought screw it, time to get that checked off the list. LOL) 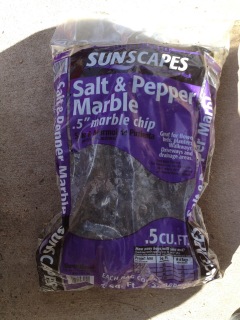 Add the rocks/gravel to the barrel.

Then add potting soil of your choice.

Yes, you could mix your own from topsoil, compost, manure, perlite, etc. but it was easier for me to just buy a bag ready to go.

Then you add your plants. In this case, I transplanted a rosemary plant I had in another planter, added a couple of marigolds and a vinca that I got from Lowe’s for color, and planted mesclun lettuce mix and basil seeds. So it’s a working planter.

The mesclun seeds (NOT to be confused with mescaline, as Sir did, asking me WTF with a cocked eyebrow until I showed Him the seed package LOL) are already sprouting. With our warm climate, I can grow salad mix greens pretty much all year round as long as I protect them from frost if the temps drop too low in the winter (rarely). It’s easy to container grow them, that’s for sure. If you stagger the planting times, you can pretty much give yourself greens all year round if you use containers and protect them.

I also picked up some raspberry and blackberry bushes, as well as a tangerine tree. I already have 3 container blueberry plants (that I need to transplant into larger containers). I’m slowly working on adding more food-bearing plants. And now, after seeing that episode of Duck Dynasty, I’m dying to get my hands on several mayhaw trees and plant them to see if I can get them to fruit. I already have some oregano, mint, chives, and basil growing.

No, I’m not an off-the-wall survivalist. But with these two post-apocalyptic series growing in my head, I’m really interested in getting back into food gardening and playing with some ideas I have that the characters might use.

Remember that Paso Wine Barrels are specially treated and will look much better than the ones shown along with the ability to last quite a bit longer.  And note we sell Decorative Planter Barrels for $20 off.