Twitter is and probably will always be a unique and unusual platform in the social media realm. I first signed up for it right after they started but after several months of trying to figure out what to do with it, I closed my account. I opened it back up a few months later as a political outlet, but that soon was tiring and didn’t help me with anything businesswise, so I abandoned it again. In early 2009 with others telling me I needed to be on Twitter, I gave it a try once more. 20,000 tweets later, I’m still using it. What this means I’m not quite sure, but regardless, that’s a lot of 140 character statements over five plus years. Yeah, I’m tired just thinking about it.

Twitter is a messaging platform – they call it a micro-blogging service – that allows a person or business to follow someone’s tweet who might be like-minded or interesting. If in turn the other person likes you, they will follow your tweets. In a most basic breakdown, Twitter isn’t unlike Facebook but without all the clutter. Another way to look at it is Twitter is for the shorter attention spans than those on Facebook, Google+ or most other social medias.

To think I started out on Twitter – the third time around – with a race marketing angle, changed to a drag racing approach, all along it was an outlet for my sports writing and then made a u-turn into the wine barrel business. That’s a whole story unto itself.

Regardless, I took up Twitter full-time, so-to-speak about the same time I started writing professionally. Yet, let it be said, writing a story or article isn’t anything like sending a quick sentence off using no more than 140 characters. However, I learned early on that Twitter forced you to put thoughts down in a micro-quip. Writers will understand that it’s easy to drone on about something without getting right to a point – Twitter helped me quite a bit in that regard. Not that Twitter is necessarily a great place to brush up on your pinpoint writing. Often words are reduced to abbreviation or just left out for the reader on the other end to figure out.

By the way, you could estimate that I’ve written roughly 2.8 million characters down on Twitter, which calculates out to easily over half a million words written (five is the average characters for a word). I should note that I’ll talk about almost anything on Twitter, whether it’s about the Central Coast, sports, my business, wine, politics or anything else. I’m probably more diversified in my comments on there than any other social media.

It always appeared that someone was coming along to replace Twitter. Remember MySpace? Yeah, I was on that before any of these other social medias; but, it became apparent it was too sleazy and most of the people using it were just into music. Twitter and Facebook replaced MySpace and so did I. I exited MySpace, closed the account and then showered. Bleh! 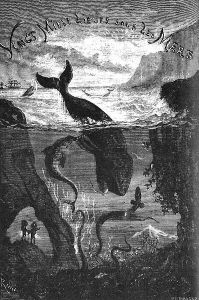 Facebook and later Google+ were supposedly going to knock out Twitter, but the tweets just kept on coming. While Facebook and Google use algorithms and reduce who sees your timeline – you’d be surprised at how few of your friends actually see your status comments – on the other hand, Twitter shows everything and has kept its platform simple, while properly monetizing the business, all-the-while keeping their program straightforward.  Twitter has their fair share of ‘Fail Whales’ along the way, but overall they’ve kept the system working well.  If you’re not familiar, a picture of a Fail Whale came up on the screen as a nice way for Twitter to say the system is down.

For now, I’ll keep using Twitter and at some point in time, in all probability, use it for advertising as well. You can check me out at @PasoDr and whether I ever do another 20,000 is questionable, but likely I’ll always use Twitter in some fashion or form.  Plus, I like the number – 20,000 Leagues Under The Sea by the great French writer Jules Verne is one of my all-time favorite books, along with being one of the first novels I ever read.  I know, you’re confused by what the heck any of this has to do with my narrative.  Hey, the book can be confusing too.

Anyway, I’ve written thousands of articles so my tweets don’t amount to nearly as many words.  Still, speaking of novels, you know how many I could have written using those 2.8 million characters on Twitter?  Mon Dieu!

PS: Check out our May Special – Get the world’s best with an incredible value if ever there was one.