The relatively unknown and quaint little town of Cayucos has been around for almost a century and half. It’s 138 year old wooden pier is nearly as old but had been closed recently due in part to its age, lack of maintenance and storms. Although technically owned by the state of California, the County of San Luis Obispo operates the pier along with being responsible for repairs. It appears those repairs will be made.

Cayucos Pier with Morro Rock in the background

The County Board of Supervisors voted for approval to spend nearly $2 million to rebuild and repair the aging pier that is one of the oldest structures on the California Central Coast. Several hundreds of thousands of dollars had already been spent from different entities including donations, to keep the venerable pier from coming apart. Pilings are missing and structural braces are bent or broken under much of the revered pier. Due to safety concerns, the pier has been closed since last summer.

And it should be noted that there’s over a quarter of a million donated dollars that will be used to keep up the repairs in the years to come.

With less than 3,000 citizens, the sleepy small town of Cayucos is unincorporated and sits on the Pacific Ocean about halfway between Los Angeles and San Francisco. Located at the northern end of Estero Bay, the area is more of a south facing beach than west and therefore is typically warmer than their compadres to the south in Morro Bay – which is roughly 10 miles away. Including Morro Rock to the south, the views are stunning and lucky for them, Cayucos is one of the those beach towns that never grew up. To the east, Whale Rock Reservoir sits just above the town. 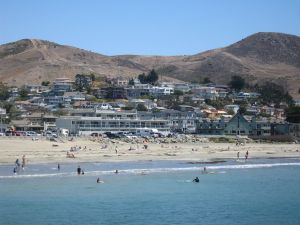 Cayucos – viewed from the pier

The Cayucos Pier was built in 1876 by the cities founder, Captain James Cass, who was originally from New England (go here for more on Cass). Considered a shallow bottom pier, it’s now nearly a thousand feet long.

Construction should begin next month with completion by May of 2015. The pier was repaired after major damage in the 1980’s and again a decade later. It’s thought some of the wood pilings could be over 130 years old – much of the pier will be demolished with new timber pilings added.

2 thoughts on “Historic Cayucos Pier To Be Rebuilt”