The magic of wine and how it’s stored is obviously up for debate. Certainly when it comes to storing wine in a receptacle, there are multiple ways to do it, not the least of which is using oak wine barrels for aging. Even when not stored in wooden casks, oak chips or other forms of oak are introduced into the container to offer that unique taste and smell that give wine an inimitable and exquisite aroma. 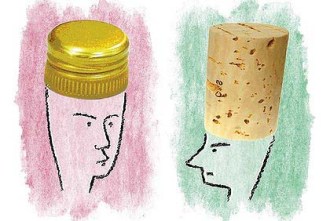 Once the wine leaves the winery and becomes part of the landscape of someone’s home or business, then the debate arises as to whether cork or screw caps should be used. We won’t argue the merits of boxed wine – I think you know how that discussion will end. This is a short and simple dialogue, plus I need to make clear I’m not a wine connoisseur, but my research into the world of wine and wine barrels has brought a lot of facts to the fore.

Cork is the classic answer to any query about how wine bottles should be enclosed. However, with wine becoming more and more popular and cork a limited resource, screw caps have made major inroads. Even amongst cork-style preservation covers, synthetics, rubber and other forms of non-cork products are being used. Still, we’re sticking to cork versus screw caps for this debate.

Cork comes from the bark of a particular cork oak (quercus suber) and has been used as wine stopping material for roughly four centuries even though the Roman Empire first introduced cork as a stopper over a 1,000 years prior. Rags were often used before cork – yes, not very presentable. With limits, cork is a renewable resource and biodegradable.

Being permeable though, has made corks imperfect with a slight bit of oxygen sometimes able to ooze into the wine. This means that a very small amount of corks can taint wine, although a few experts say sometimes a little breathing can be good for more full-bodied wines, allowing them to level out. Although maybe not scientific, there’s something symbiotic about wine coming from an oak barrel and being corked with oak.

Screw caps were first prominent as a closure with ignominious jugs of wine a half century ago. However, the turn of this century saw newer winemakers using screw caps regularly as closures on better wines. Though not biodegradable, with advent of wines popularity growing at ever higher rates around the world and limits on corks availability, screw caps have become more and more the norm with wines.

However, without the capacity to offer any redeeming qualities other than keeping a wine the same as it was when it entered the bottle, screw caps are simply a cheaper and easier application for wine bottles, especially those wines that should be consumed earlier rather than later. Of course, a supposed advantage of screw caps to cork is the fact wine doesn’t need to be stored on its side – corked bottles will dry out if not left on their sides. It should be noted that the manufacturers of screw caps have designed a product that will breathe.

Screw caps are the norm down under and are now popping up all over the United States, while Europe has been slow to change. Screw caps are easier to open although yours truly has had to mangle a few caps that would not come off without a visegrips. Another more anomalous thought is: Does the formality of opening a bottle with a corkscrew matter?

In the end, the screw cap is here to stay; it’s just the issue as to which and how many wineries will change over from the traditional and erstwhile cork to the modern and contemporary screw cap. There will likely be a place for both as some traditions die hard and modernity be damned.

For my own personal opinion, the creaking shrill sound of a screw cap isn’t very remarkable. Plus, there’s something special about the ‘pop’ of opening a bottle of wine … don’t you think?

Additional source: To Cork or Not To Cork