Some people love to hear about weather and others kind of shrug. Still, the year-round weather in Paso Robles is unique with a different take on four seasons.

The weather on the Central Coast of California is varied in and of itself. There are the somewhat damp and foggy beach areas with the cool Pacific Ocean holding temperatures down while the Santa Lucia Range keeps the inland areas such as Paso Robles relatively warm and dry.

The assortment of micro-climes within this region, especially for San Luis Obispo County, vary widely and make this entire area weather distinctive. For instance, the south facing beaches such as Avila Beach have their own tiny zones, being warmer by 10 degrees or more over their neighbors just south of them such as Pismo Beach. San Luis Obispo which is only a handful of miles inland from this same beach area, has some of the mildest weather in the country.

As the crow flies 30 miles north of the city of San Luis Obispo on the other side of the Cuesta Grade sits Paso Robles. Mild isn’t in its repertoire, with cool wet and sometimes cold temperatures in the winter, Paso ends up with hot dry summers … and heavy winds thrown in at times during the first half of the year.

Winters are cool and wet

Although Paso is certainly cold enough in the winter, snow is rare.

The winter year starts off in January with mostly cloudy wet weather and cold temps of 20 and 30s for lows and highs ranging from 40s all the way to 70. February offers little change from January except maybe slightly more rain, but not quite as cold temperatures. March can indeed roar in like a lion with cool rainy climes, however as spring eases into the mix, wet weather lightens and 70s become more regular with lows in the freezing range rare.

With Irish-like hills everywhere and some vineyards starting to green up as well, April offers up a unique range of weather not seen with any other month. The temperatures have warmed regularly into the 70s with occasional 80s popping up for highs. Lows have crept their way up into the 40s. Daytime temps bump up early in the day but strong fresh winds from the southwest blow cool air from the beaches inland and keep highs from being warmer than they otherwise would. By the end of April with its lively colors, showers are few and far between.

Spring is often called the windy season for this region and May is no different. The difference from April though is the temps have notched their way up into 80s on a more regular basis – lows are still in the 40s. As the golden hillsides show up, June sees the incessant wind but potentially has the first 100s poking onto the scene. Lows are in the upper 40s to low 50s and the infamous Paso Robles diurnal can really show itself this time of year. For instance, personally I remember several years ago, a June day roared up to 106, but the low was 44 – a difference of 62 degrees. As a note, when in Paso, be prepared clothing-wise for wide ranging temps like this in a single day.

July brings on the heat. 90s and 100s are the norm, with temps as high as 110 possible. The winds start letting up some by mid-summer and actually, August is almost a dead-ringer for July. Only difference between the two hot summer months is lesser winds for August. September ushers in some vague changes as the heat lessons slightly with more diverse highs ranging from 100 down to 80.

As the Autumn hues become vibrant, October starts off as a still warm part of the year, but ends with cooling temps that can see lows sporadically in the 30s. November strides in with cooler weather as highs struggle to stay in the 70s with lows regularly in the 30s. Thanksgiving has shown to be warm certain years with bright sunny temps, but then again, other years have seen cold conditions as winter makes an early entrance. With color gone from most of the Paso area, December is considered the coldest month of the year as the rainy season begins. Temperatures can see 20s for lows, and even teens can make an appearance. Highs range in the 50s and 60s. 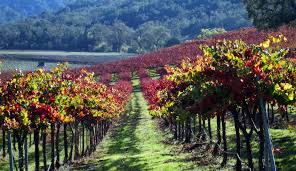 That’s a trip around the year in Paso Robles. Winter offers mostly cold and wet weather transforming into a drier climate with a windy but relatively mild spring. Summer is hot and dry as is early fall before giving way to a cooler end of year.

Lately the weather has been dominated by a lack of rain with drought, and average-wise, temperatures have been warmer. Regardless, hope this gives a quick synopsis of weather in wine country on the Central Coast.