Even with a drought, port slowdown, an elongated recession and a state that is hurting rather than helping, the overall wine production in California was strong in 2014. And hence it helped lead the United States to its second highest dollar value ever for exporting wines, according to the Wine Institute.

Even though revenue was down slightly from a year ago, U.S. exports have trended upwards over the past several years, led by California which produces 90% of the countries exports. In total, there was about $1.5 billion in wine export revenue from the U.S.

Worldwide, consumers are clamoring more and more for California wines even if Europe has slowed in its desire for American vino has waned. Excluding China, exports to East Asian countries are up.

Oddly or not, there’s a budding patronage with the single biggest increase by any country for importing U.S. wines: Nigeria. The Wine Institutes numbers show the oil-rich nation saw a 172% increase from the year before, moving Nigeria into eighth worldwide as a consumer of American wines.

Taken as a whole, total export volume rose slightly from a year ago with nearly 117 million gallons of wine exported from the U.S. The largest total increase of $33 million year-over-year was from Canada with 5.8 million gallons more shipped to the Great White North in 2014 over 2013.  Canada ranked second overall right behind the European Union (EU) as the biggest importer of American wine. Japan ranks a distant third behind the EU and Canada. 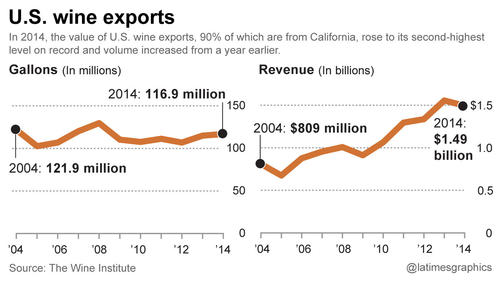 Other hindrances that the U.S. overcame to produce such powerful numbers is a strong dollar plus heavy foreign taxes and levies. While the many obstacles that have been laid before California vintners haven’t slowed production, the fact they generated more wine and still increased the quality says volumes about the Golden State’s place in the winemaking world.

By the way, the statistic stating 90% of wine in the United States produced by California might be low, considering much of the states wine is shipped to other states who in-turn ship overseas.

Not to be outdone, the U.S. only exports about one-tenth of the wine they make. Meaning a vast majority of its wines stay within its borders, to be drank by Americans. I’ll say bottoms up to that!