If you’ve considered a half wine barrel as a planter for flowers, you may be concerned with the weight and therefore difficulty of moving you’re oak planter. Let go of your concerns because we have an almost magical half barrel idea for you.

Take note that using this idea will likely make your planter last forever given certain care is taken or you use a Decorative Planter Barrel. 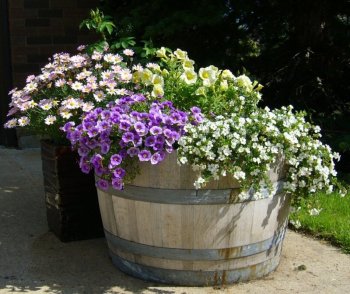 This is simple but a great idea nonetheless. First, you need a genuine oak wine planter barrel, either new or used. Next, purchase wood chips to fill about half the barrel. Acquire multiple flowers at your nursery or garden center and you can either place the flowers in another planter or leave them in their original existing plastic containers.

You can use the chips or add more to fill around the potted flower containers so as to keep them secure. Water them as you would normally. That’s it. Now, you have a barrel that you can move around and add, subtract or change flowers without having to dig them out. It’s almost magical when you’re able to make changes and nobody knows how easy it was for you.

It should be also noted that since you won’t be watering this barrel’s soil, the construction of a used barrel will dry up and become somewhat wobbly as the staves condense and pull apart. There’a an answer to that though with – as we mentioned above – the Paso Wine Barrels Decorative Half Planter Barrel. Because it has tightened bands, stain, sealer and varnish, they don’t tend to dry out as quickly as standard used barrels do. Also, they are reinforced with an interior band allowing them to sustain many years not being moist.

If you decide on the used barrel, you might want to spray it with a garden hose occasionally or each time you water – keeping the wood from drying out will allow the barrel to stay tighter.

Now it’s time to have what your friends, neighbors or cohorts didn’t figure out – an almost magical everchanging and portable flowering wine barrel.