The main street that runs through Paso Robles is none other than Spring Street.  Aptly named for the hot springs that once were all over the Paso area, hot springs with their sulfur and mud made the region a popular destination many years ago. 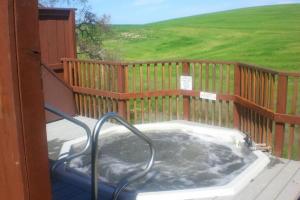 One of the many reasons Paso Robles is now famous includes their mineral hot baths.

The springs have been a godsend and at times a hell all wrapped up in one.  The earliest times in Paso Robles two centuries ago found the padres at Mission San Miguel using the soothing springs.  The mission fathers were made aware of the thermal mineral springs by the local Native Americans (Salinan) who knew of the hot thermal waters.  From the City of Paso Robles website, the area was known as ‘California’s oldest watering place’.

Actually Paso Robles was originally called Agua Caliente – not to be confused with the desert resort casino near Palm Springs, California.  The name simply referred to the area as ‘hot water’ or ‘hot springs’.

In the earliest years of the area back in the mid-1800s, there really wasn’t anything in town but a log cabin built around a mineral hot springs near where present day City Hall sits.  When the town received a post office, shortly afterwards the city fathers changed the name to El Paso de Robles – ‘The Pass of the Oaks’ – a tree which the Central Coast has a bounty of. 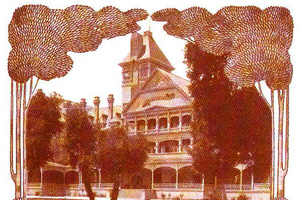 Bath houses such as the Paso Robles Inn were famous a century or more ago.

The restorative and healing affects the hot springs had made Paso Robles notable as a health resort for many decades and the bath houses were world renown including at the Paso Robles Inn.  The steaming caldron of water from deep in the Earth’s crust drew the wealthy and famous who made Paso Robles a trendy stop and even the Pittsburgh Pirates made the town their spring training grounds in the 20s and 30s.  Jan Paderewski, who was a famed pianist/composer, ended up making Paso Robles one of his homes – drawn by the healing affect of the mineral springs on his hands.  The notorious James brothers, Jesse and Frank, lived in Paso for a spell.

Situated about halfway between San Francisco and Los Angeles, the mineral springs were popular for travelers but as better transportation and other corridors emerged, the recognition waned along with the fact that some springs dried up during the 20th Century.  By the way, the city’s Municipal Pool on Oak and 28th Street was once home to a sulfur hot springs. 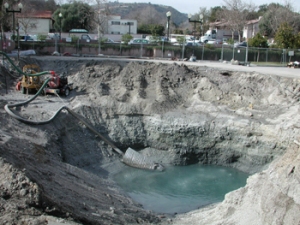 The 2003 San Simeon Earthquake reopened up a hot springs hole in Downtown Paso.

Ranches and orchards sprang up everywhere in the ‘North County’ region of San Luis Obispo County where Paso Robles sits and of course in the latter stages of the 1900s, vineyards brought a new fame and fortune to the area.  An earthquake in 2003 reconnected the hot springs to the surface in some areas while bringing unwanted fissures that brought a terrible smell in town that wasn’t remedied until a couple years ago.  Still, with the new reputation of the region as a destination for vacationers, these thermal and soothing waters may have brought the mineral hot baths back into prominence of sorts.

Paso has a few local businesses that offer mineral hot springs including the famous Paso Robles Inn in Downtown, the River Oaks Hot Springs Spa on the north part of town and the eclectic and natural Franklin Hot Springs southeast of the city. 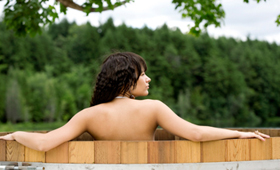 As the world’s number one wine region and a popular traveling destination, the history and background of Paso Robles can be lost sometimes.  However, the cities rich past is still present and something tells me that more hot springs will pop up before long, bringing their popularity in the region full circle from centuries ago.

Sources and photos in part are thanks to River Oaks Hot Springs Spa, Paso Robles Inn and the City of Paso Robles.