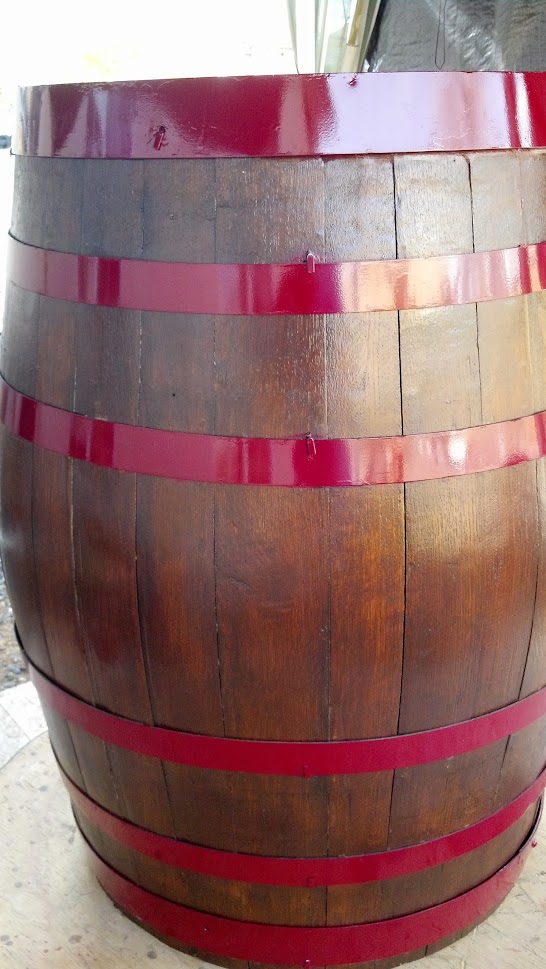 Our special project barrel has been a lot of work including the simple sounding prepping – but most everything has gone rather smoothly … until now.

More trees were chopped down to aid us in redoing one of the bands after initially painting the entire barrel’s hoops.

We may or may not have mentioned it but if you had looked closely at the head bands in the pictures – those hoops that were at the far top and bottom – they weren’t in good shape.  We sanded and prepped them for primer and paint but didn’t like the way they came out with one particular hoop.  The primer had covered some of the pits and it’s not unusual for paint to take care of any other very minor pits.  However, we didn’t like the way it appeared after drying, so we striped it again – we use dark grey primer as seen in the picture.

Note: we know that some of these imperfections come with dealing with an old wine barrel and sometimes we let these blemishes go but in this instance, they were pronounced and it was our artistic impression that we should do this one band over again.

Regardless, the one band was once again primered, sanded, prepped and then painted one more time.  The overall look was better and we were happy with the end result.  The barrels owner inspected what we had done and couldn’t wait to get his renewed barrel back.

We will buff it out and give it one final cleaning.  Looks like one last installment is necessary as we unveil the final product.

By the way, we need you to vote in our band color poll.  It’s quick with just one question.  Go here: https://pasowinebarrels.wordpress.com/2014/01/22/wine-barrel-bands-what-color-looks-best/

Taking a dilapidated old wine barrel and making it look better than new is a challenge when it has an end of it that is rotten – as we stated when we started this project.  Plus the wine barrel had previously been stained and painted which made the work all that more tedious.

There are at least two bands left on a barrel at all times while staining and sealing.

And we should note ever so importantly that we can’t take all the bands off or the barrel would come apart and that isn’t a pretty thing to have happen – think of the funniest comedy scene you’ve ever saw.  Yes, we’ve been there and don’t want to do it again.

Now that we have the barrel stained, we will need to prep the barrel with the hoop bands on it and ready the bands for paint.  Again, we will use burgundy on this one which makes it meld into the barrel for a more subtle look.  The owner of the barrel wanted that particular kind of appearance.  By the way, go to our poll and give your opinion of what color you think would look the best.

The bands are in place and prepped with paper and tape used to keep the band paint off the wood.

Having had a classic restoration business, we know all too well how much time and effort goes into prepping, which is one of the most unrewarding jobs to do.  We use the county rag (San Luis Obispo Tribune) for cover – it has to be good for something.

We will paint next and then let dry before buffing and shining it up a bit.  You can see how that goes with what should be our last installment of ‘Recrafting An Old Wine Barrel’.