With Paso Robles As Example

A diurnal sounds like a … uh, uh uh, easy guys, this isn’t toilet humor (pun intended). Actually, diurnal has more than one meaning and we’re not dealing with a daily journal.

No, what we will talk about is the diurnal (meteorologically speaking) that means the difference between day and night pertaining to weather temperatures. And in Paso Robles, on the California Central Coast, we have a doozy.

In its most basic description, the diurnal is a spread of temperatures relating the highest in one day to the lowest of that same day or within the next 24 hours. For instance, one of the first summers I had here in Paso, we had a high of 106 and a low of 44. That differential was 62 degrees – an amazing temperature swing for 24 hours. And in actuality, it wasn’t even 24 hours as the high was around 4:00 p.m. and the low was about 5:00 a.m. In roughly half a day, the diurnal was 62 degrees.

Although this anecdotal example is a bit on the extreme, this huge change isn’t that unusual in Paso Robles, especially during the summer month cycle and is an interesting aspect to the area. In fact, August has highs averaging in the low to mid 90s with lows in the low to mid 50s. June, July, September and October also have wide-ranging diurnals. 50 degree disparity in highs and lows is common fare in summer and early fall.

Without going into another entire story on temperatures in Paso, the area lies at the backside of the Coastal Range and typical of many regions in California, the temperatures soar in the late morning through mid afternoons. Sea breezes begin blowing in from the Pacific Ocean, working their way through the mountain passes and dramatically cooling the air – thus, large varying temperatures from night to day.

A large diurnal allowed for ranches and orchards, which once dotted the Paso Robles landscape as much as vineyards do now.

A slight offshore keeping the marine layer away with warm air aloft during the day and a sun beating down, allows temperatures to climb quickly up. When the late afternoon winds bring in the much cooler air: voila! You have a large diurnal. It should be noted that humid regions and/or areas with bodies of water tend to have a low diurnal. When thinking about moderate diurnals, think Great Lakes region along with the Eastern Seaboard, Gulf Coast and the immediate coastal areas of the Pacific Northwest. They see little change from day to night in temperature swings.

Those that live in the desert might know about the large temperature variation or diurnal. The Great Basin (Nevada) has normally huge divergences between high and lows in one day. If you look up wide swings in diurnal temperatures, you will inevitably hear about the Upper Plains like the Dakotas also having tremendous climatic variances – due in part to not having any large body of water to moderate the temperature. The continental landlocked plains of the Central Asian Steppe region also has severe temperature fluctuations due to lack of any major body of water. The record diurnal at 100 degrees is held by the small town of Browning, in northwestern Montana (source: National Park Service). 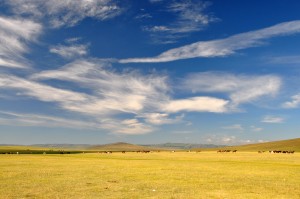 The Mongolian highlands or Steppe region is one of the areas of the world where the diurnal is wide ranging.

A day in Paso

Breaking the diurnal down inside a day, the greatest change is normally from late afternoon before the sun is low in the sky until just after sunset. Normally here in Paso, it might be 90 in summer on a typical late afternoon around 6:00 p.m. and by 9:00 p.m. it could be 65, possibly changing more than 10 degrees in one hour. By the way, several years ago, shortly after leaving a winery on a blistering hot August day, I looked up on the temperature inside the car and it read 110 degrees outside … and it was 5:30 p.m. And still the lows were in the 50s.

Paso Robles is generally a dry region and the only reason it isn’t a desert more so like the Central Valley – such as Bakersfield (100 miles east) where day time Summer temperatures don’t drop as severely in the evenings – is the effects of the Coastal Range; plus, Paso is only 20 miles from the ocean and the water temperatures blow in to keep it cooler.

The lands just southeast of Paso Robles called the Carrizo Plain has quite a divergence between high and lows called a diurnal.

Soon I will be talking about how that diurnal directly affects Paso Robles and its grape vines. Hopefully this didn’t confuse you and I didn’t confuse myself – it has been done. Daily diurnal cycles are interesting characteristics of weather and your daily life, so the next time someone asks you about diurnals, now you know. And no, it doesn’t have anything to do with strange restrooms … keep it clean.  😉