the Year’, it might be difficult to believe that one of the main reasons that Paso Robles is receiving so many accolades is the unassuming next town south of them: Templeton, California.  That’s right, when articles and association as well as websites talk about Paso Robles and wine, they likely are talking about none other than Templeton.  The secret is out.

You may be wondering why I’m mentioning Templeton.  It’s true that the Paso Robles AVA (American Viticultural Area) is a wide swath of San Luis Obispo County that starts in the north with San Miguel at the Monterey County border and heads south to Santa Margarita, east to Shandon and all the way west through to the center of the Coastal Range.  In other words, there are many different towns and areas within the Paso AVA.  However, when discussing Paso Robles vineyards and wineries, many of these vintners are outside the city limits of Paso Robles and actually are in what was once the obscurity of the Templeton zip code. 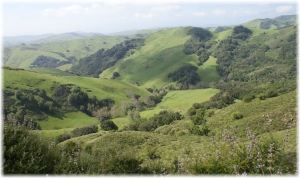 Numerous vineyards set up shop in the Templeton Gap.  It’s a low point in the Coastal Range that allows the Pacific Ocean’s air to come through and essentially moderate the temperatures of the upper inland San Luis Obispo County valleys.  That moderation gives vintners an ability to grow a wider variety of grapes without the harsh highs in summer and lows in winter.  Also, the land is rich and has very favorable soil, yet the terroir is diverse.

The town itself of less than 8,000 is a lot like what Paso Robles was 50 or more years ago and sits roughly halfway between Atascadero and Paso – the two major cities in northern San Luis Obispo County.  There’s a simple downtown area that goes through Main Street (what else) and gives you the feel that you’ve entered into a different dimension – maybe a combination of the ‘old West’ and a typical small Midwestern town.  By the way, Templeton is full of excellent bed and breakfast inns.

As the end of the line heading south out of San Francisco in the late 1800’s, the town was originally called Crocker after an executive of the Southern Pacific Railroad, but then was promptly changed to Templeton, the executive’s son.  Known for its railroad yards in the early years, it was a major town in the region.  Never incorporated, the town was eventually bypassed by the trains and their larger brethren cities north and south of it, remaining just a small community.  That is, until Paso Robles began acquiring praise and reviews as a great travel destination and more importantly, as the number one wine region in the world.

a relatively quiet and small town reflective of a bygone era.  And yet, that era may be ending as folks find out where many of the now famous wineries are actually located.  When they discover how charming and quaint the town itself is, there won’t be holding Templeton’s seeming anonymity back any longer.

In fact, Paso Robles is the largest undivided AVA in California, but soon the region will be subdivided into approximately 11 new AVA’s including the Templeton Gap District.  Although still technically under the Paso Robles AVA umbrella, each of these districts will be able to label their wines with the new AVA designation if they wish.  At that time, the Templeton name will be splashed across all over the world as a major wine producing region.

So the secret is out.  None of us who love Templeton necessarily wanted this secret to get out but what heck, we’ll share.