I wrote about a tiny vineyard with a huge passion a few years ago that oddly helped me get a pretty good part-time gig with Yahoo! as a sports writer.  The story was about Luis Nunez’s very small vineyard and his enthusiastic passion of trying to make the best Zinfandel he could.  This is a follow-up and although there were some rocky roads along the way, let’s just say he’s done a remarkable job.

Without retracing his early steps, Luis, a retired peace officer, had finally produced in a bottle, his first wine called the Anomaly.  It was apropos name for this was just second-year vines that produced a Zinfandel that was astonishingly good.  How good was it?  It received a Bronze medal in the Orange County Fair, one of only a couple contests he entered the wine in.  Remember, this was the second year the vines produced grapes!  Not only that, but his label earned him a Gold medal.

Christian Lazo Wines helped Venture Vineyards quite a bit in the early going.

Christian Lazo Wines deserves part of the credit because they offered their insights and facility to help Luis create this surprising and rambunctious upstart of a Zin.  With such a small quantity of wine though coupled with friends, neighbors and family members clamoring for this amazing vintage, it wasn’t a year before the wine was gone.  Which as it turned out was just as well.

Doing it the old fashion way, Luis didn’t want any filtering of his product as he sought just the raw pure wine.  A little more than six months after bottling, the wine started to turn in color and although the flavor seemed to standup, the Anomaly wouldn’t have made it past a year.  Maybe a lesson was learned.

A bittersweet situation as you can imagine, Luis was determined to make the next batch of wine better.  This vintage would be named the Shark and like its namesake, it had to fight and dig deep taking on all nemesis’.  Like a Great White, the Shark vines would have to show they were great grapes, working through spring freezes and mildew battles (because of late rains) – but in the end, Luis and his young but formidable vines were able to produce roughly 50 cases.

Not to be outdone, the label is also a Gold medal winner.

Although reluctant, Luis filtered this batch and then had several in the wine industry taste the still young wine.  Even other vintners, who aren’t prone to brag on someone else’s wine, told him he had a winner.  He decided to put the Shark in a handful of fairs and wine contests such as the prestigious International Amateur Wine Competition and won multiple medals including a Gold.  And to put a period on this standout vintage it not only earned a Gold; but, this time the Shark bit off a bigger prize … Double Gold!

Consider this: Paso Robles is currently the world’s top wine region with California’s heritage grape being the Zinfandel, a popular varietal in Paso.  Luis Nunez’s Shark was the only gold medal awarded this past year to someone from Paso Robles in the Zinfandel category at the International Amateur Wine Competition.  Heady stuff indeed.

This stunning success was great and acknowledged all his hard work and effort to create an ultimate Zinfandel.  However, even though Luis was on top of the world, with high and lows as any success story would go through, having put so much work and effort into the Shark, the following year was tough to manage.  Due in part to the unending Great Recession, Luis’ personal finances wouldn’t allow him to hold on to that year’s vintage, so he sold it to Christian Lazo.

Along with making sure he could keep the next year’s vintage and more resolute than ever before, Luis wanted more.  Boy did he get more … more grapes that is.  All estimations were that he would have a ton and half, which would give him three barrels worth and eventually 75 cases.  Those estimations were low.

Waiting for a bigger and better one? 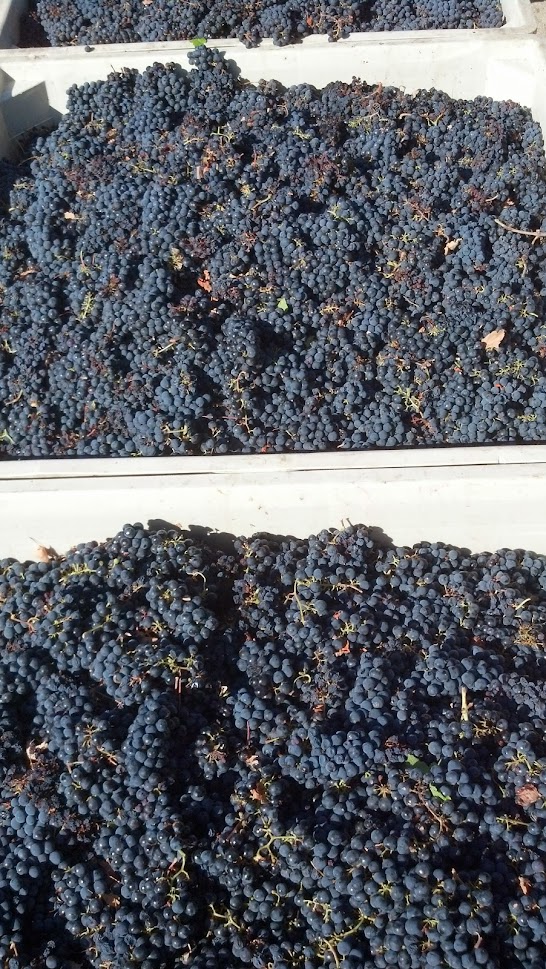 One of these bins is roughly half a ton of grapes.

The new vintage is called the Bullet and came through with a solid two tons or four barrels.  The vines were picked clean – this time by family and friends and then processed at Falcon Nest.  Barrel samplings at 16 months say the wine is excellent and ready for bottling, but Luis is leaving it in the oak barrels for at least another six months.  A vintner of this talented gift knows when the time is right.

The story is still unfolding as last year’s vintage was smaller with the main reason being the extreme drought we are undergoing in California stunting the growth somewhat.  That led to a ton-and-a-half or three barrels.  Luis sold one of the barrels but has two left of what preliminarily is being called the Rebel.  For now, everyone waits in anticipation of what the Bullet and then the Rebel might bring.

His operation may be small but Luis has invested mightily in tiny Venture Vineyards.  For instance, he controls the temperature and humidity of his oak wine barrels with an enclosed insulated cellar at his property, which has a professionally installed cooling system.

The current extreme drought brings on limits to watering (see related articles below under ‘Water stories’) so Luis feels he’s planning on fewer grapes than normal – except we already know what these vines are capable of.  By the way, weather experts say we might have an El Nino coming this year and that would be much needed good news for farmers because the state and federal government have cut off their water.

Luis Nunez and his Venture Vineyards have done what few others could do.  What the future holds for Mr. Nunez is still an open book, but be assured, with the passion to endure and succeed, history has shown us more triumphs are certainly headed his way … and more great wines are headed our way.

Want to know more about or be a part of Mr. Luis Nunez’s success?  Email me.

PS: Sadly, two months later, our good friend Luis Nunez suddenly passed away along with his passion … but his tiny vineyard could be yours. Go here.