There is a giant and spacious campus on the California Central Coast that is home to one of the top state universities in the United States. Roughly halfway between the metropolis’ of San Francisco and Los Angeles, the school sprawls next to hillsides in the northern part of the city of San Luis Obispo as California Polytechnic State University or Cal Poly for short.

Less than 10 miles from the Pacific Ocean, Cal Poly was established 113 years ago as a vocational or trade school. In the early years of the Great Depression, the state changed the precepts to a technical school. Not long after WW II, Cal Poly began offering Masters degrees.

The expansive school, nicknamed the Mustangs, is in fact the second largest university or college in California with 9,678 acres. It’s always ranked as one of the Top 10 universities in the West and this past year was rated #1 architecture program in the country. Overall, the prestigious and renown U.S. News and World Report’s America’s Best Colleges guidebook ranks Cal Poly as Best in the West with the #1 engineering program in the country. It goes on-and-on. It is quite a school.

Whether it’s the mild climate, the attraction of nearby beaches, beautiful crystal clear air, the laid-back small town atmosphere or the majestic morros (hilltops) called the ‘Nine Sisters’, the spectacular landscape of the Central Coast seems to serve and add to the quality of learning. 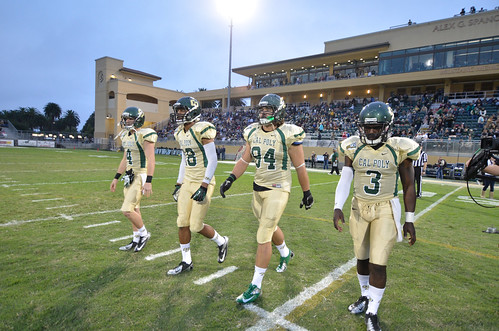 Sports are all quality level but if you’re expecting a school like USC or UCLA, this isn’t it. Their football team is a decent Division 1AA team that makes the playoffs more so than not and their basketball team, which was always so-so, made the NCAA’s this past year for the first time. Their baseball team has been to the playoffs recently.

Wines where it’s at

However, to those who are in the industry, Cal Poly is now becoming a leader in producing high quality graduates in the wine industry. Their viticultural department has created longstanding and steady flow of vintners, managers and vineyard careers. To be more precise, the College of Agriculture, Food & Environmental Sciences gets students ready to succeed in the ever-growing wine industry.

Although the California Central Coast as a whole, is well-known and produced a plethora of wine, the North County of San Luis Obispo – Paso Robles – is the world’s number one wine region. This has created a demand, which has given students an advantage of being wanted and needed when they earn their degrees.

Cal Poly teaches their students all facets of a multidimensional industry, including growing the product, making the product and of course marketing the product. Whether the student wants to farm grapes, make wine or manage and market, all aspects are covered.

President of Cal Poly, Jeffrey D. Armstrong, may have said it best:

“In today’s work, college graduates must be able to work creatively and think critically across multiple disciplines. Cal Poly’s graduates can – and do. Employers love our graduates, because they have two hands on the problem and two feet on the ground. They’re ready to contribute on Day One.”

On a personal note, I knew little about the school before I moved here from Los Angeles several years ago. By following sports, that was about the only thing I did know. Now having been around the region for a little while, I can appreciate the quality of schooling and why students want to be here on the Central Coast. When I’m at wineries, it’s a common site to see Cal Poly Mustang clothing being worn, as the influence is palpable.

With about 20,000 students, the school has formed a backbone of high standards that will help assist and shape today and tomorrow’s society in oh so many ways. Those same students are likely drawn by the beauty of the area along with so many activities like biking, surfing or an abundance of hiking to keep the mind fresh – all combined with a topnotch university gives Cal Poly a special place in the hierarchy of higher learning.

NOTE: In the fall of 2014, Payscale.com listed amongst public universities, Cal Poly in the Top 15 for earnings made after they graduate. As the number one rated state school in California, Cal Poly graduates were averaging $56,200 early in their careers and $100,100 average during the middle of their careers.